how we redefined boating

Making boats electric is inherently difficult. A 7,5m long planing recreational boat consumes 12-18 times more fuel than a family car. At the same time, one kg of gasoline contains ~15 times more usable energy than one kg of the most compact batteries. Because of this, electric boats are not viewed as a viable alternative to combustion engine boats. Existing models are slow or have a very limited range. The current market for electric boats is consequently small, estimated to be less than 1%. The energy equation must be solved.

Since 2015, the team behind Candela Speed Boat AB is determined to find ways to make electric boats with both range and speed. The team consist of some of the leading experts in their respective fields with backgrounds from Eurocopter (structural composite engineering), Saab Gripen (flight control electronics), Artemis and Oracle racing (America’s Cup, hydrodynamics), Scania (transmission & hydraulics) and the Technical University of Denmark (dynamic modelling and software algorithms). In addition, the company is managed by people with many years of senior management and CEO-level experience from both start-ups and large global corporations. 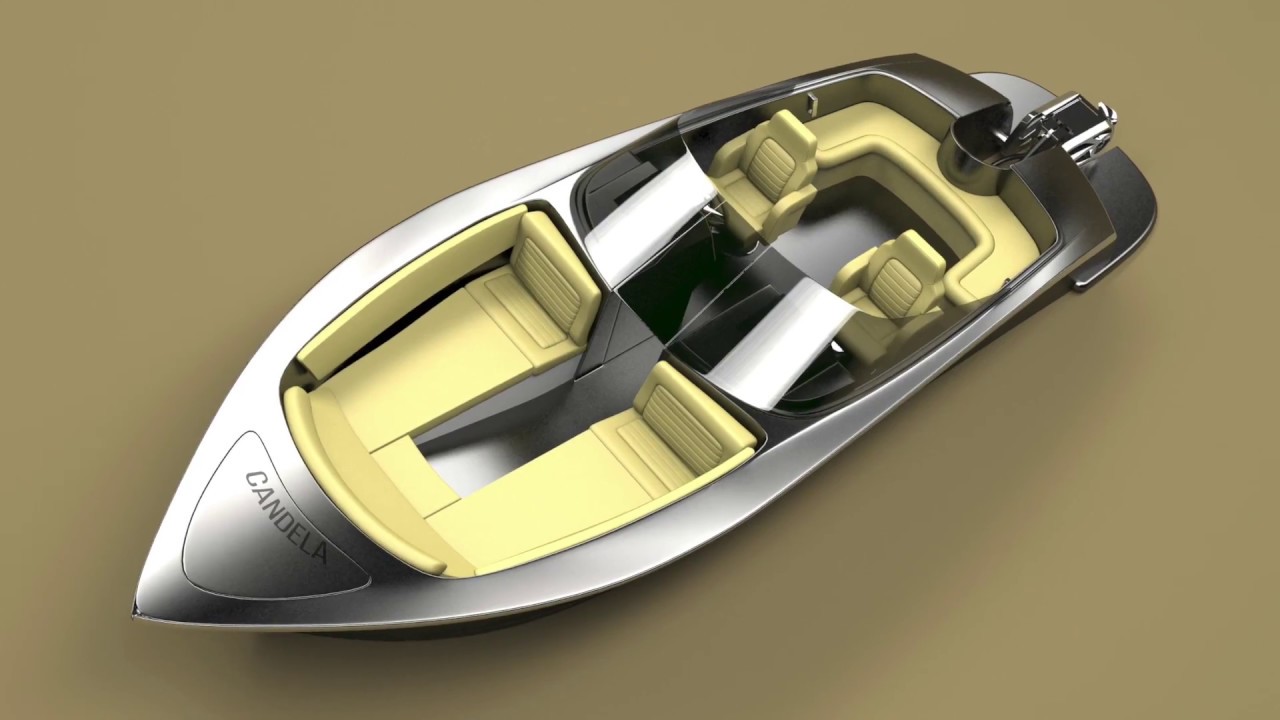 At the end of 2016, a full-scale prototype was launched and, after some fine tuning, the target of more than 50 nautical miles per charge in 20 knots was reached! That has never been achieved by an electric pleasure boat before. The journey up until this point can be seen here.

The achieved range is ~4 times higher than the best electric boats currently on the market and is close to or on par with combustion engine boats of the same size.

The energy reduction is achieved by the use of:

In addition to solving the range issue, the Candela Seven features:

After a second prototype, we are now well beyond proof of concept, and have production facility set up for serial production. The first customer deliveries were completed in the spring of 2019.

Candela’s unique design goes beyond state-of-the-art. It is the world’s first electric recreational boat with hydrofoils. Several patent applications have been filed. The product is based on the following technical findings and inventions:

Hydrofoils combined with the inherently superior energy efficiency of an electric motor allows for a 80 % reduction in energy consumption at speeds around 20 knots. The fully submerged hydrofoils also provide a smooth cruise without slamming and wake build-up which is beneficial for the local environment.

A patent-pending foil control system where the control of height, roll and pitch is made exceptionally robust.  Previous submerged foil systems seen on all larger commercial vessels rely on flaps/ailerons, which would not be robust enough for a consumer product.

A unique retraction mechanism solves the issues met in shallow waters, while trailing and during storage. The front foils are retracted vertically and protected by a step in the hull. The aft foil is retracted through a double rotational movement and protected by the swim platform

A state of the art flight controller that captures the boat’s movements from 7 sensors and establishes the full-state 3×6 state matrix (position, velocity and acceleration with regards to position in x, y and x and rotation around the same axis) using advanced sensor fusion algorithms. This is needed since the boat is inherently unstable in roll and height. The position of the actuators controlling the forward and aft foils is updated at 100 Hz resulting in a very smooth and steady ride even in tough wind and sea conditions.

Ultra-light hull materials are used to offset the battery weight and to further reduce the power needed. A carbon fibre single skin in hull, deck, hydrofoils and interiors reduces the weight of the boat, including 230 kg batteries and all equipment to less than 1350kg. The hull weight is approx. 180 kg and the deck 60 kg – a conventional glass fibre boat of the same size typically weighs more than 1500 kg.

Combining all these innovations in an all-new boat design allows Candela to optimize the benefit of each concept – something that cannot be accomplished by retrofitting an existing hull. Candela flying can be seen here.

Any cookies that may not be particularly necessary for the website to function and is used specifically to collect user personal data via analytics, ads, other embedded contents are termed as non-necessary cookies. It is mandatory to procure user consent prior to running these cookies on your website.